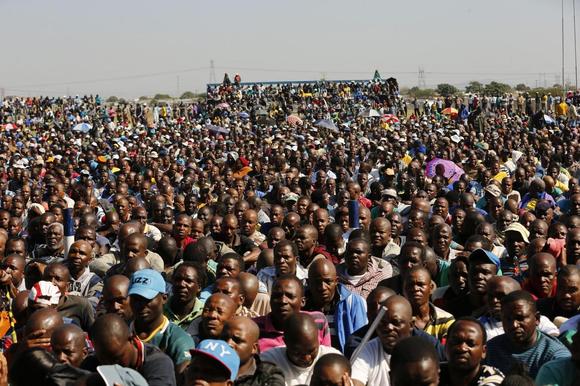 Lonmin workers on strike listen to President of South Africa’s Association of Mine workers and Construction Union (AMCU) Joseph Mathunjwa (not in picture) as he delivers his speech at the Wonderkop stadium in Nkaneng township outside the Lonmin mine in Rustenburg May 14, 2014.

PRETORIA (Reuters) – Wage talks between South Africa’s AMCU union and major platinum producers were deadlocked on Monday, prompting the mining minister to abandon his mediation role and dashing hopes for an end to a strike that is pushing the economy towards recession.

The five-month strike has halted mines that normally account for 40 percent of global platinum output and has hit wider economic output in Africa’s most advanced economy, driving it into contraction in the first quarter of this year.

The meeting on Monday was crucial as the government had said it would pull out of its mediation role if a deal was not struck then – and, after the talks ended at an impasse, it duly announced that the mining minister would no longer take part in negotiations.

“No agreement was reached today,” Joseph Mathunjwa, president of the Association of Mineworkers and Construction Union (AMCU), told reporters as he left the talks in Pretoria.

“AMCU made many concessions. We actually moved twice to make employers move closer to us,” he said, but added that the union did not compromise its demand for a 12,500 rand (700 pounds) a month basic wage, which excludes allowances.

About 70,000 AMCU members downed tools in January at mines run by the world’s top three platinum producers – Anglo American Platinum, Impala Platinum and Lonmin – to demand that their basic wages be more than doubled to 12,500 rand ($1,200) a month.

AMCU and the producers have previously held several rounds of talks, with the companies

offering pay increases of up to 10 percent, which would raise the overall minimum pay package to 12,500 rand by July 2017, although this includes cash allowances for necessities such as housing.

The union has so far rejected the offers from the companies and those proposed by a government mediating team.

Mining minister Ngoako Ramatlhodi said at the weekend that the government would pull out of its mediating role if the two sides could not reach a deal at the meeting on Monday, saying the government could “take them to the river but not make them drink”.

“The minister will no longer be involved,” mining ministry spokesman Mahlodi Muofhe told the SAfm state broadcaster on Monday after the talks ended without resolution.

“The parties committed to continue to talk to each other. We don’t think that the parties have the appetite to continue with this impasse for much longer.”

The companies said in a joint statement that they would “review further options available to them”, but gave no further details.