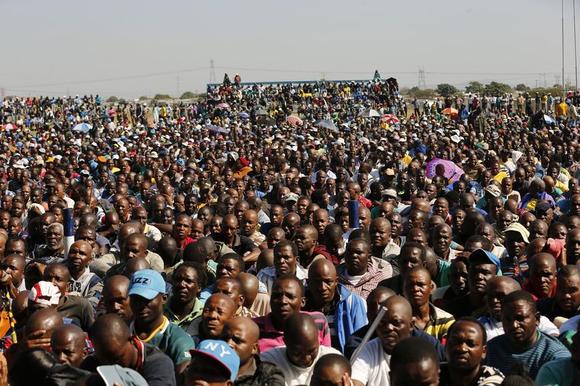 Lonmin workers on strike listen to President of South Africa’s Association of Mine workers and Construction Union (AMCU) Joseph Mathunjwa (not in picture) as he delivers his speech at the Wonderkop stadium in Nkaneng township outside the Lonmin mine in Rustenburg May 14, 2014.

(Reuters) – The latest round of talks aimed at ending a five-month strike in South Africa’s platinum mines “went well”, the president of the striking AMCU union said on Wednesday.

“The meeting went well. The talks are ongoing,” AMCU leader Joseph Mathunjwa told Reuters. A government team tasked with resolving the strike met AMCU’s leadership on Tuesday and is due to sit down with the management of the three major platinum firms today. Reuters