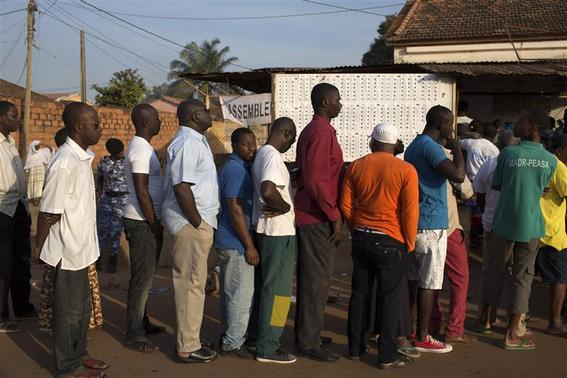 BISSAU (Reuters) – Vote counting began in Guinea-Bissau after a heavy turnout in Sunday’s legislative and presidential elections meant to bring stability to the West African state after years of coups and political infighting.

No major incidents were reported by the close of polls and monitors said they expected a record turnout. The electoral commission said turnout had reached 60 percent by 1430 GMT but did not give more detailed numbers.

At sunset, officials in Pefine, a neighbourhood in the crumbling capital Bissau, sat under a mango tree tallying ballots under the watchful eyes of residents and election observers.

Results are due by Friday. If no candidate wins an outright majority, a second round will be held between the top two.

“I’ve voted for Guinea-Bissau. This is the last chance, things must change,” said Augusto Francisco da Fonseca Regala, a 55-year-old architect, raising an index finger stained with purple ink to confirm he had cast his ballot.

“For two years, everything has been at a standstill. I hope this election will bring peace and stability so that we can get back to work and develop the country.”

The last attempt at an election, in 2012, was aborted when troops under army chief Antonio Indjai stormed the presidential palace days before a run-off was due to take place.

Indjai released two doves as peace symbols after voting early on Sunday, but made no comment on the twice-delayed poll, which took place under pressure from donors and regional powers keen to see an end to decades of conflict and instability.

No elected president has completed a five-year term in the former Portuguese colony, which has become a major transit point for smugglers ferrying Latin American cocaine to Europe.

The final turnout at polling stations, which were set up in schools, on sidewalks and in one abandoned cinema, was likely to be between 70 and 80 percent, according to one source close to the organisation of the election, who asked not to be named.

The frontrunner of 13 presidential candidates is Jose Mario Vaz, a former finance minister running for the dominant African Party for the Independence of Guinea and Cape Verde (PAIGC).

“We need to stabilise Guinea-Bissau. I cannot do this alone but with the help of everyone in Guinea-Bissau,” Vaz said.

The PAIGC party machinery makes it likely to secure a majority the 100-seat parliament but Vaz’s victory is far from certain because of public anger at traditional parties.

Many of the 800,000 registered voters are voting for the first time and are eager to usher in a new leadership.

Vaz’s candidacy is also tainted by accusations from Bissau’s attorney general of involvement in the embezzlement of a $12.5 million grant from Angola, something Vaz denies. His main challenger is former World Bank executive Paulo Gomes.

Guinea-Bissau is home to 1.6 million people and covers about 10,800 square miles (28,000 sq km). Weak state institutions, dozens of remote islands and a jagged coastline of mangrove creeks have made it a paradise for smugglers.

Indjai was indicted last year by a federal grand jury in New York on cocaine and weapons-trafficking charges but he escaped a sting operation to catch him that netted a former navy chief. Both men deny involvement in drug trafficking.

About 80 percent of the population depends on cashew farming, but post-election stability could help attract investors to untapped mineral resources including bauxite, phosphate and offshore oil.

Some 110 million euros in European Union aid, frozen after a 2011 military uprising, could be unblocked too.  Reuters