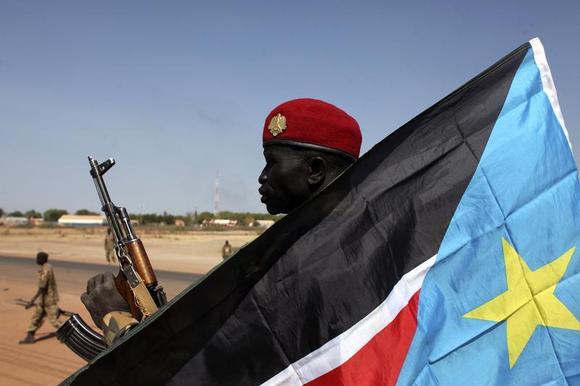 An SPLA soldier is pictured behind a South Sudan flag as he sits on the back of a pick-up truck in Bentiu, Unity state January 12, 2014.

JUBA (Reuters) – South Sudan’s defence minister said on Friday the leader of rebels battling government forces did not have enough control over his fighters to make any ceasefire hold, as peace talks dragged on with no sign of a deal.

Sudan, from which the south split in 2011, relies on revenues from fees charged for use of its pipeline that carries South Sudan’s oil exports to international markets.

Troops loyal to President Salva Kiir and rebels backing the deputy he sacked in July, Riek Machar, have been fighting since mid-December. The conflict has increasingly followed ethnic lines, pitting Kiir’s Dinka group against the Nuer of Machar.

Juuk said Machar had used a spiritual leader, who he named as Dak Kueth, to stir up people to fight.

“(Machar) is not in control of these people. So even if a peace agreement is signed, or cessation of hostilities, these people who are not under the control of Machar will continue creating insecurity for the people and government,” he said.

“We cannot make a unilateral ceasefire because it is they (the rebels) who are attacking the civil population and government positions,” Juuk added.

The two sides are negotiating a ceasefire deal in the Ethiopian capital Addis Ababa, but there has been no clear progress. Rebel demands include that Ugandan troops deployed in South Sudan stop supporting government forces in combat.

Uganda’s military support of Kiir has raised worries that other regional players could be drawn into the conflict, in which a U.N. envoy said on Friday thousands had been killed and “mass atrocities” had been committed by both sides.

South Sudan has also asked Sudan for engineers to help maintain oil output which has slipped to about 200,000 barrels per day, from about 245,000 bpd before the fighting.

Asked if South Sudan would seek a joint security force with Sudan to protect fields, Juuk said: “Until now we have not asked the Sudan government to send in their forces.”

“Should there be a threat, anything threatening the oil field, definitely the government of South Sudan may ask the Sudan government to come in and support,” the minister said.

Juuk said the government was in control of Bentiu, the capital of oil producing Unity state, and that the two sides were still fighting over Malakal in another oil area and the flashpoint town of Bor.

All three places are north of South Sudan’s capital Juba.

The rebels have acknowledged the loss of Bentiu but the fate of the other two towns has been unclear as fighting has raged.

International medical organisation Médecins Sans Frontières/Doctors Without Borders (MSF) said it was forced to suspend activities in Malakal following the looting of its compounds. It said fierce fighting had broken out in Malakal on January 13.

Juuk shrugged off the rebels’ criticism of the role of Ugandan troops in South Sudan.

“We have requested support from Uganda. It is not a new situation, countries seek support from other countries whenever they are in trouble,” he said.

U.N. Assistant Secretary-General for Human Rights Ivan Simonovic called on Friday for the speedy establishment of an independent, impartial fact-finding commission on the conflict.

“Clearly the crisis, which started as a political one, has now taken on an inter-ethnic dimension that urgently needs to be addressed,” he said after a four-day visit to the country.

“People on both sides are absolutely convinced that the other side is to blame, which makes the situation even more dangerous,” he said.