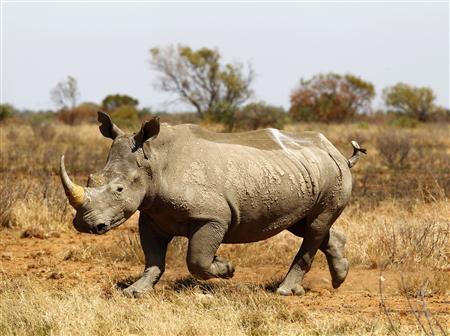 An eight-year-old rhino walks after being tagged with a GPS device at the Mafikeng Game Reserve in South Africa’s North-West province, in this November 12, 2010 file photo.

JOHANNESBURG (Reuters) – The number of rhinos killed by poachers has hit a new annual record in South Africa, raising worries of a downward population spiral in a country that is home to almost all of Africa’s rhinos.

As of the end of September, 704 rhinos had been killed by poachers in South Africa, exceeding the annual record of 668 set in 2012, according to data provided by the Environmental Affairs ministry on Tuesday.

If the trend keeps at its current pace, more than 1,000 rhinos would be killed in 2014, putting the species on the brink of a population decline that the ministry has said could lead to the end of wild rhinos in about a decade.

The greatest threat to the estimated 22,000 rhinos in South Africa comes from those trying to cash in on the black market value of their horn, which sells at prices higher than gold.

Many of the poachers come from neighboring Mozambique and sell the horn to crime syndicates to feed rapidly rising demand in Southeast Asia, where the horn is thought by some to cure cancer and tame hangovers.

“We need people to be ashamed of this. The fact that our rhinos are killed is because there is a market out there. There are people who are coming to steal our heritage,” said Fundisile Mketeni, a top biodiversity official at the ministry.

He said a baby boom among rhino stocks is softening the blow, while the ministry has mounted a global campaign to shut the doors for illegal exports to places such as Vietnam, China and Thailand, which are the main consumers of the contraband.

Most of the killings are taking place in the flagship Kruger National Park, which borders Mozambique. The park covers an area about the size of Israel and has been the focus of an arms race

between poachers and rangers.

The park service has been turning its rangers into soldiers, using drones to patrol airspace and sending out crack units by helicopter once suspected poachers have been sighted.

“The poaching syndicates are determined to carry on with their nefarious acts, using the poverty that is prevalent in Mozambique and South Africa to recruit poachers,” said Ike Phaahla, a spokesman with South African National Parks.

Up until about 2010, only a handful of rhinos were poached but the number shot up when rumors circulated at about that time that a Vietnamese minister’s relative was cured of cancer by the horn. There is no basis in science to support the claim.

In traditional Chinese medicine, the horn was used to treat maladies from rheumatism to devil possession. Now, many newly rich Vietnamese consume it after a hard night of partying.

Rhino horn, once seen as a treatment only for royalty, is being swallowed by a small segment of the Vietnamese population who can afford prices of about $65,000 a kilogram, conservation groups say.

Due to the high costs, much of the so-called rhino horn sold at pharmacies in major cities is fake, with buffalo horn the main substitute.

“There is a small group who have the money for rhino horn. We need to get out scientific evidence to show the people of Vietnam that it doesn’t work,” Vo Tuan Nhan, vice chairman of the Vietnamese parliament’s science and environment committee, told a seminar in Johannesburg last month.

(Additional reporting by the Hanoi Bureau and Christine Kim in Pretoria, editing by Gareth Jones)  reuters