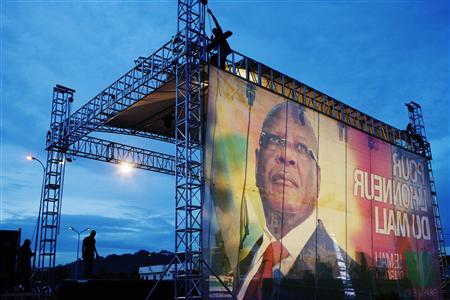 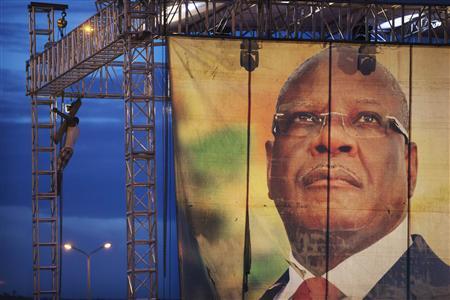 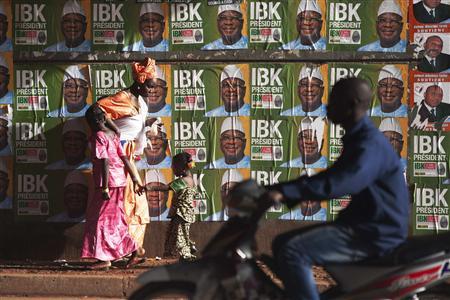 Men set up a stage for a campaign rally next to a poster for Malian presidential candidate Ibrahim Boubacar Keita (known as IBK) in Bamako, Mali, August 9, 2013.

By Daniel Flynn and Tiemoko Diallo

BAMAKO (Reuters) – Mali’s presidential front-runner wrapped up his campaign on Friday with a promise to restore peace to the West African country scarred by a coup and an Islamist uprising that triggered French military intervention.

Drawing wide support with a pledge to impose order after a March 2012 military coup plunged Mali into chaos, Keita has secured the endorsement of 22 of the 25 losing first-round candidates.

Cisse, 63, the head of the West African monetary union (UEMOA), took just 19 percent of the first-round vote with promises to improve education, create jobs and reform the army.

Once seen as a model for democracy in turbulent West Africa, Mali imploded last year when al Qaeda-linked rebels took advantage of the coup to seize control of the vast desert north, where they imposed a harsh version of sharia (Islamic law).

France intervened militarily in January to destroy the Islamist enclave, which it said threatened the West. Now Paris is looking to pull out most of its remaining 3,000 troops, despite ongoing tensions with Tuareg separatists in northern Mali after a ceasefire last month.

“My first priority, will be to pursue … a lasting peace deal,” Keita, universally known by his initials IBK, told French news channel France 24. “That will be a real peace, not a false one.”

Sunday’s election should unlock some $4 billion in aid and allow France to hand responsibility for maintaining security to a 12,600-strong U.N. peacekeeping mission being deployed.

With the end of campaigning coinciding with the Eid festival to mark the end of Ramadan, the Muslim month of fasting, both candidates cancelled their main political rallies.

Supporters of both camps instead drove around the waterlogged streets of Bamako, Keita’s stronghold, honking car and motorbike horns and waving posters. In a carnival atmosphere, each side held concerts in the centre of the riverside capital.

“IBK is someone who has a firm hand and we need that right now in Mali,” said Saidou Salif Traore, 33, a university teacher who attended a youth rally in support of Keita. “He is the only one who saw these problems coming.”

Keita opposed a 2006 peace deal with Tuareg separatists that demilitarised much of northern Mali – a sparsely populated area the size of Texas. He was a critic of the government of President Amadou Toumani Toure that was ousted amid widespread frustration over its corruption and passivity towards the Tuareg revolt.

‘TRICKERY WILL NOT TRIUMPH’

Keita has captured the popular mood by avoiding outspoken criticism of the coup leaders, earning the tacit blessing of the military. He has also successfully courted Mali’s powerful Islamic clerics, several of whom have endorsed him.

Critics say Cisse, who condemned the coup, defends a corrupt political class that dragged Mali into the current crisis by ignoring rising frustration at poverty. The majority of Mali’s 16 million people live on less than $1.25 a day.

Cisse rejects the claim, saying he is a defender of democracy. After challenging the result of the July 28 election, alleging systemic fraud, he has vowed to accept the outcome of the second round.

“I call on you all to vote on Sunday. Trickery will not triumph,” Cisse told cheering supporters at a rally.

With hundreds of Islamist fighters killed and those who survived scattered by the French-led offensive, the most pressing challenge facing the new president will be peace talks with the Tuareg MNLA separatists.

A ceasefire that allowed voting in northern Mali obliges a new government to open talks within 60 days. The MNLA says fighting may resume if it does not win greater autonomy for their northern homeland, which they dub “Azawad”.

The MNLA signed an agreement with umbrella Tuareg and Arab groups this week to work together for more independence from Bamako.

Many in populous southern Mali, however, are bitterly opposed to any concessions to the Tuaregs, whom they blame for triggering the crisis with their uprising.

The overall turnout of 49 percent in the July 28 first round was a record, though it was far lower in the north and in camps housing 170,000 refugees in neighbouring Mauritania, Burkina Faso and Niger.

The United Nations flew election material to Mauritania on Friday in an effort to boost participation in the runoff.  reuters