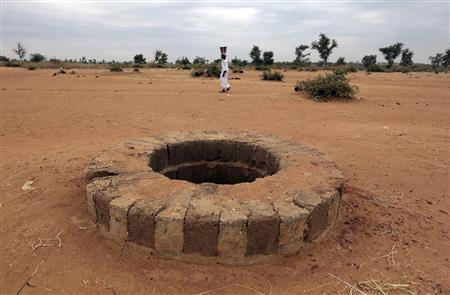 A woman walks past the well where the bodies of suspected Islamist rebels, according to UN director of Human Rights Watch, Philippe Bolopion, had been dumped, in Sevare January 28, 2013.

The United States and European Union are backing a French-led intervention in Mali aimed at removing the threat of radical Islamist jihadists using the West African state’s inhospitable desert north as a springboard for international attacks.

The recovery of Timbuktu followed the swift capture by French and Malian forces at the weekend of Gao, another major town in Mali’s north that had also been occupied by the alliance of Islamist militant groups since last year.

The two-week-old mission by France in its former Sahel colony, at the request of Mali’s government but also with wide international support, has driven the Islamist rebels northwards out of towns into the desert and mountains.

Without a shot being fired, 1,000 French soldiers and paratroopers and 200 Malian troops seized Timbuktu airport and surrounded the town on the banks of the Niger River, looking to block the escape of al Qaeda-allied insurgents.

In both Timbuktu and Gao, cheering crowds turned out to welcome the French and Malian troops.

A third town in Mali’s vast desert north, Kidal, had remained in Islamist militant hands. But the secular Malian Tuareg MNLA rebels said on Monday they had taken charge in Kidal after Islamist fighters abandoned it.

A Bamako-based diplomat confirmed the MNLA takeover of Kidal, saying the Tuaregs were likely to try to press long-standing demands for autonomy for their northern region.

A French military spokesman said the assault forces at Timbuktu were being careful to avoid combat inside the city so as not to damage cultural treasures and mosques and religious shrines in what is considered a seat of Islamic learning.

“The rebels set fire to the newly-constructed Ahmed Baba Institute built by the South Africans … This happened four days ago,” Ousmane told Reuters by telephone from Bamako. He said he had received the information from his chief of communications who had travelled south from the city a day ago.

Ousmane was not able to immediately say how much the concrete building had been damaged. He added the rebels also set fire to his office and the home of a member of parliament.

UNESCO spokesman Roni Amelan said the Paris-based U.N. cultural agency was “horrified” by the news of the fire, but was awaiting a full assessment of the damage.

Marie Rodet, an African history lecturer at Britain’s School of Oriental and African Studies, said Timbuktu held one of the greatest libraries of Islamic manuscripts in the world.

“It’s pure retaliation. They (the Islamist militant rebels) knew they were losing the battle and they hit where it really hurts,” Rodet told Reuters. “These people are not interested in any intellectual debate. They are anti-intellectual.”

The Ahmed Baba Institute, one of several libraries and collections in Timbuktu containing fragile documents dating back to the 13th century, is named after a Timbuktu-born contemporary of William Shakespeare and houses more than 20,000 scholarly manuscripts. Some were stored in underground vaults.

The French and Malians have encountered no resistance so far at Timbuktu, but they face a tough job of combing through the labyrinth of ancient mosques and monuments and mud-brick homes between alleys to flush out any hiding Islamist fighters.

Timbuktu member of parliament El Hadj Baba Haïdara told Reuters in Bamako the Islamist rebels had abandoned the city. “They all fled. Before their departure they destroyed some buildings, including private homes,” he said.

They have retreated in the face of relentless French air strikes and superior firepower and are believed to be sheltering in the rugged Adrar des Ifoghas mountain range, north of Kidal.

The MNLA pro-autonomy Tuareg rebels who say they now hold Kidal have offered to help the French-led offensive against the al Qaeda-affiliated Islamists. It was not clear, however, whether the French and Malians would steer their offensive further towards Kidal, or hold negotiations with the MNLA.

With its cultural treasures, Timbuktu had previously been a destination for adventurous tourists and international scholars.

The world was shocked by its capture on April 1 by Tuareg desert fighters, whose separatist rebellion was later hijacked by Islamist radicals who imposed severe sharia (Islamic law).

Provoking international outrage, the Muslim militants – who follow a more radical Salafist brand of Islam – destroyed dozens of ancient shrines in Timbuktu sacred to moderate Sufi Muslims, condemning them as idolatrous and un-Islamic.

They also applied amputations for thieves and stoning of adulterers under sharia, while forcing women to go veiled.

On Sunday, many women among the thousands of Gao residents who came out to celebrate the rebels’ expulsion made a point of going unveiled. Other residents smoked cigarettes and played music to flout the bans previously set by the Islamist rebels.

Hundreds of troops from Niger and Chad have been brought to Gao from neighbouring Niger to help secure the town.

As the French and Malian troops thrust into northern Mali, African troops for a U.N.-backed continental intervention force for Mali, expected to number 7,700, are being flown into the country, despite severe delays due to logistical problems.

Burkina Faso, Benin, Nigeria, Senegal, Togo, Niger and Chad are providing soldiers for the AFISMA force. Burundi and other nations have pledged to contribute.

“If there are dormant cells here and there, criminals in places, and of course the environment gives these groups the opportunity to hit and run, that would call for a strategy to help to clean up the region,” Lamamra said.

Yayi put the cost of the African intervention force, now revised upwards, at $1 billion and said up to 10 African countries may be required to send troops.

The AU is expected to seek hundreds of millions of dollars in logistical support and funding for the African Mali force at a conference of donors to be held in Addis Ababa on Tuesday.

Earlier this month, he had warned that providing such U.N. support for combat operations in Mali could put U.N. civilian staff in the region at risk.

Benin’s Yayi urged other NATO members and Asian countries to follow France’s lead and send troops to Mali. “We have to free the Sahel belt from the threat of terrorism,” he said.  reuters